Athens (Greek: Αθήνα) is the largest city and the capital of the Greek republic.  It has a typical subtropical Mediterranean climate. As of 2011, Athens had a population of 745,514 people and has a total land area of 412 square kilometres. It is the eighth largest city in Europe and one of the EU business center.

Athens has a recorded history of up to 3,000 years; it is known as “the cradle of Western civilization.” Athens still retains a lot of historical sites and a large number of works of art, the most famous of which is the Acropolis of Parthenon which is regarded as a symbol of Western culture. 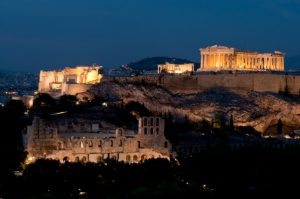 Athens’ Acropolis, Greece’s most famous and outstanding ancient buildings, was the center of religious and politics in the ancient days. Acropolis’ size is about 4 square kilometers, located in the center of Athens Acropolis hill; it was built in 580 BC. The earliest buildings in the Acropolis were the Athenaeum and other religious buildings. Acropolis in Greek means the city of high land.

Santorini is one of the most beautiful and romantic island in the world. A must visit island if you are in Greece. It is located in the southern Aegean sea, about 120 miles from the mainland.

Oia town is the second largest town in Santorini but it is the most beautiful town. It is built on the cliffs of the sea and is considered to be the world’s most beautiful place to watch the sunset. Every day thousands of tourists from all over the world gather here to enjoy the beautiful sunset. The blue-top churches built on the cliffs, the numerous nice looking white houses, as well as traditional Greek windmills make the view especially the sunset absolutely gorgeous, stunning and unforgettable. It is every photographer’s paradise.  Stay here at least few days. 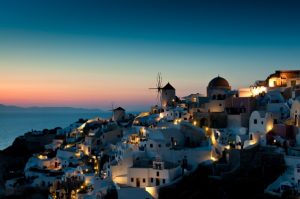 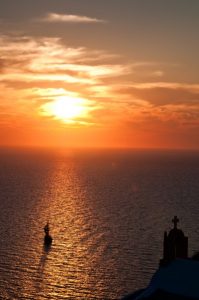 Mykonos Town is the best representation of the Cycladic Architecture. It is one of the most attractive places of the Cyclades islands. The narrow streets with the bright white buildings on either side seem to have no end. May take you to a quiet church, may also bring you surprises with a unique store. Greek mythology says that the island of Mykonos is made of the broken body of a giant killed by Hercules. Its famous landmark is the iconic 16th-century windmills, which sit on a hill above the town.

There are more than 300 small churches on the Mykonos Island. Walking through the narrow residential street, you will come across a small church every few houses or shops. 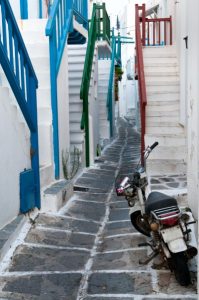 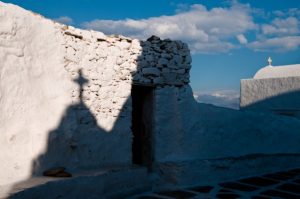 One famous resident of Mykonos is actually the cure Pelican. It strolls in the streets every day, and when you eat in the open-air restaurant, its big mouth will try to share your dinner. In 1954, after a storm, a pelican decided to take this island as home, islanders named it Pedro, it has since become the mascot of the island.

The original Pedro has long passed away; the islanders miss it, and so they get a new one to let the legendary continue.